With our main Studio based in Sydney's Inner West suburb of Five Dock, the students of Sydney Guitar School travel from all over Sydney  to make the most out of the best quality of teaching on offer. We also offer tuition in Kirribilli, in North Sydney and in the Sydney Central Business District.

Our teachers have a wealth of knowledge and experience on guitar and are Conservatorium trained and educated.  With both teaching and International performing careers, you know you are in great hands.

We are committed to our students, assisting them with preparation for A.M.E.B exams, eisteddfods and tertiary auditions. Lessons are conducted in a friendly, warm environment, where students can feel comfortable and inspired about learning to play.

Giuseppe Zangari ensures that the training that each and every student receives is comprehensive, tailored to the student’s needs, and moreover, enjoyable.

If you or your child is in need of a guitar instructor, lessons are available 7 days a week. 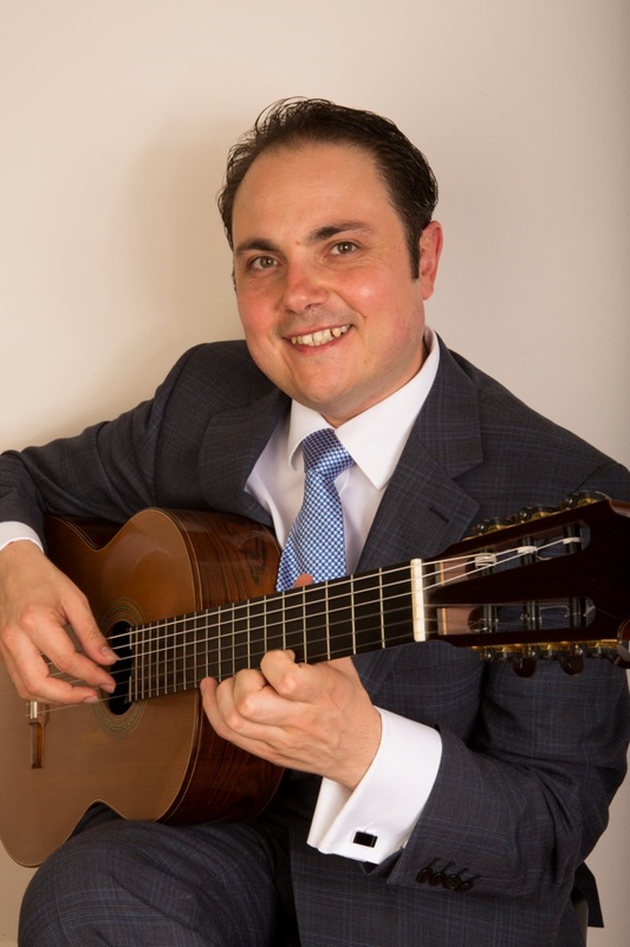 Giuseppe Zangari Principal Sydney Guitar School
Born in Sydney, Giuseppe received his Bachelor and Master of Music degrees in performance from the Sydney Conservatorium of Music, studying under Gregory Pikler. He was awarded an Australia Council Grant and a scholarship from the Italian Government which saw him head abroad to Milan in 2006. There Giuseppe undertook further studies with Duo Maccari-Pugliese at the Accademia Internazionale della Musica, and Paolo Cherici at the Conservatorio di Musica "Giuseppe Verdi".

Giuseppe has a deep interest in the research and performance of the nineteenth century Italian composer, Mauro Giuliani. Giuseppe’s research specifically looks at instrumental music created from popular operas of the nineteenth century. Giuseppe also has an interest in the advancement and development of contemporary Australian compositions. He has performed in premieres of solo and chamber works by Australian composers including Rosalind Carlson, Andrew Chubb, Nigel Butterley, Stephen Lalor and Jim Chapman.

As a soloist and chamber musician, Giuseppe has given live broadcasts for ABC Classic FM through the 'Young Australia Series' and ‘Sunday Live’, 2MBS FM and 2NUR FM. He has also performed extensively as a soloist and chamber musician at a variety of festivals and concerts throughout Australia. His concert tours have included New Caledonia with celebrated Australian pianist Simon Tedeschi, an Australian concert tour with noted French guitarist Rafael Andia in the Alhambra Guitar Quartet and this year, a concert tour of Sweden with flautist Sally Walker and the Haga Duo (Sweden).  Giuseppe’s recent chamber collaborations include, renowned flautist Jane Rutter, baritone Jose Carbo, violinist Victoria Jacono-Gilmovich, mezzo-soprano Jenny Duck-Chong, and conductor Christopher Bearman. 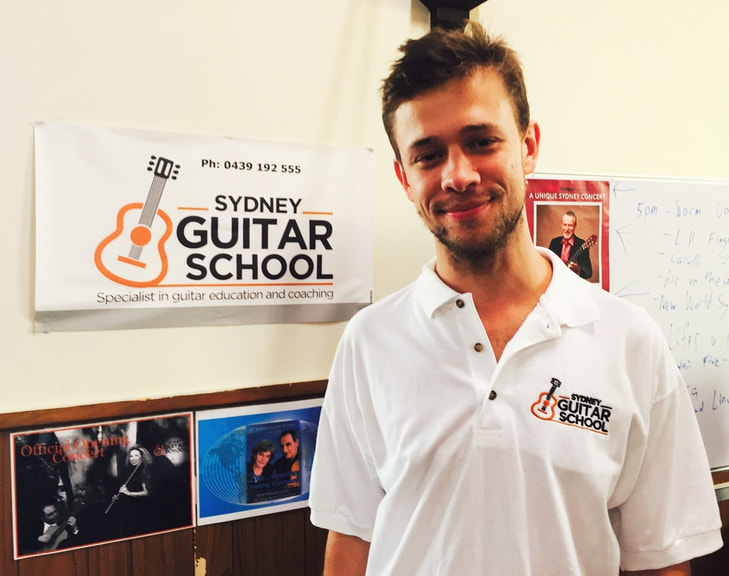 Joseph Littlefield Contemporary, Classical, Bass Guitar
Joseph received his Bachelor of Music with first class honours in 2007, under scholarship from the Sydney Conservatorium of Music.
Joseph has been teaching guitar for over ten years at some of Sydney's most exclusive schools. He enjoys teaching a diversity in styles on nylon-string, acoustic, electric and bass guitars.

Joseph is an active solo performer. Apart from putting on concerts in Sydney, 2015 saw Joseph performed his transcriptions of works by György Ligeti across the U.S. and Europe. He has recently recorded these works and they will be available for commercial release in the near future. He has also performed with Sydney’s top contemporary classical groups including Ensemble Offspring, Halcyon and the Sydney Chamber Opera Company.

He is currently preparing to play a program with the Australian Opera and Balet Orchestra in April 2016. He has performed and recorded with baroque music ensembles and personalities such as Salut Baroque and recordist Alicia Crossley. He also plays with a variety of jazz and African music groups.
​
Joseph's teachers and mentors have included some of Australia’s leading guitar teachers Gregory Pikler, Phillip Houghton and Jane McClennan. Joseph has worked with some of the world’s best guitarists in Europe at festivals, summer schools and master classes with renowned performers such as Paul Galbraith, Pavel Stiedl, Dennis Azabagic, Miles Okazaki, Dusan Bogdanovic and Carlos Bonell.
Joseph has won various competitions including the Sydeny Eisteddfod, the B’nai Brith Eisteddfod, the Inner West Performing Arts Challenge and was finalist at the 2012 Adelaide International guitar competition. 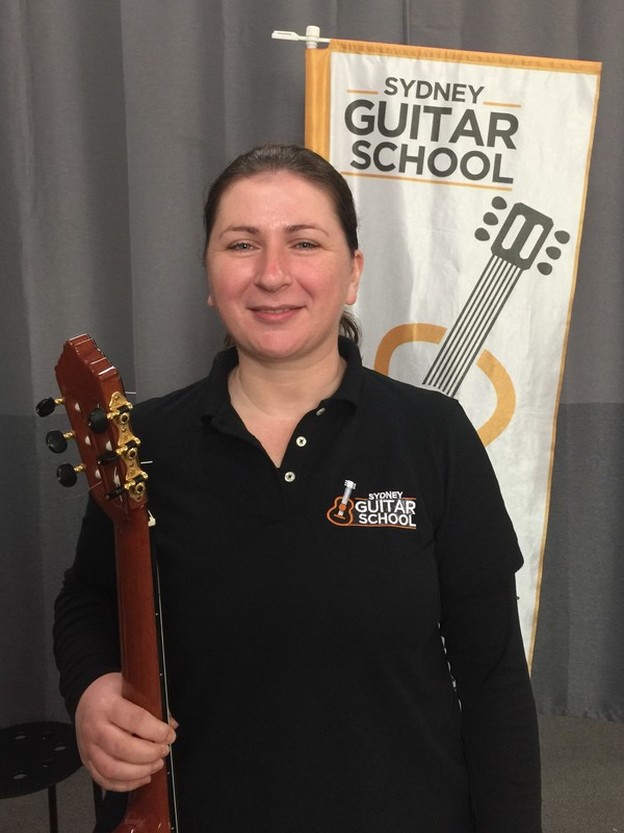 Biljana Mitrovic completed high school Kosta Manojlovic in Belgrade, Serbia and in 2003 received her Bachelor of Music from the Sydney Conservatorium, majoring in guitar performance.

Biljana has years of guitar teaching experience at various Sydney schools, including the Sydney Conservatorium Open Academy, St Andrew's School and for the past ten years has been teaching at Shore School, North Sydney and Cranbrook School. 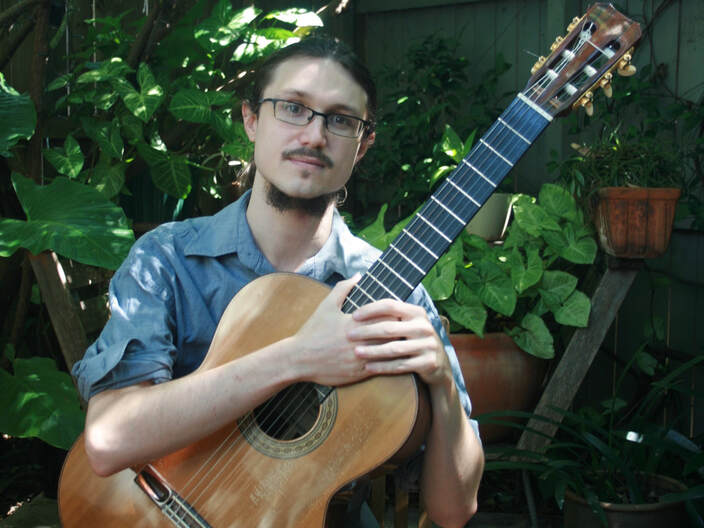 Oskar de Mari-Jones. Lute, Classical Guitar, Electric Guitar, Music Theory
​Born in 1987, Oskar de Mari-Jones has had an eclectic and multi-faceted musical education. His first guitar lessons were with his father at the age of five; aged 10 he took up the trombone and at sixteen, he returned to the guitar to seriously study the instrument, in particular the classical repertoire, studying privately with Giuseppe Zangari.

In 2006, Oskar received an Entry Scholarship to the Sydney Conservatorium of Music, where he studied guitar with Greg Pikler and Phillip Houghton, internationally renowned guitarist-composer and educator. During his studies, Oskar received various scholarships, including the McCaw-Baiton scholarship, the Mary Little Memorial and prizes for high academic results. During this time, Oskar was a core member of the Sydney Guitar Quartet, which recorded the music of Phillip Houghton for a documentary film and won prizes in various ensemble competitions.

Oskar has performed throughout Sydney, making his Opera-House solo debut in 2005 at the age of 17 for the Sydney Region Music Festival. In 2008 he recorded a program of Lute music for the soundtrack of Serenity, a Music-Therapy DVD. In 2010 he broadcast a solo recital for 2mbs as part of their Young Performer Award, for which he competed as a finalist later that year.

Recently, Oskar has expanded his practice into composition, improvisation and jazz, developing a concept for teaching others to hear and improvise more fluently. Oskar is an Ars Musica Australis Fellowship-holder. 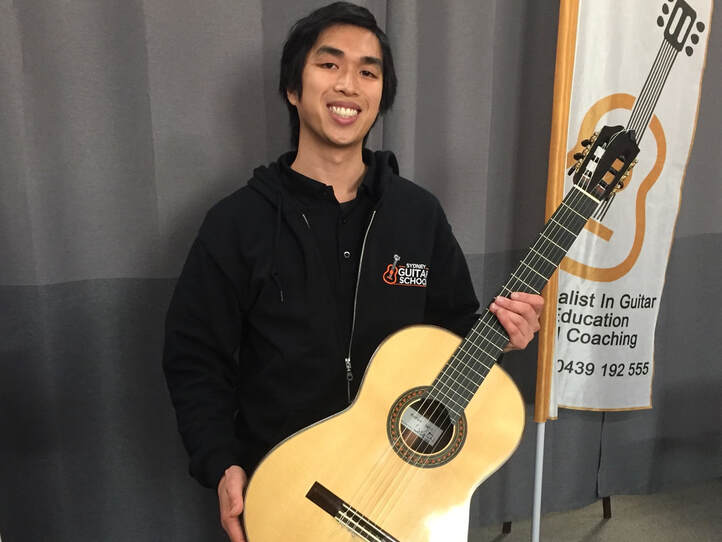 His ambition as an artist is to showcase the intimate and expressive qualities of the guitar in a way that speaks profoundly of the instrument and its repertoire and in 2017 had his international recital debut in Kuala Lumpur, Malaysia.

Jeffrey is a successful participant of the Sydney Guitar School Teacher-Mentorship Program. 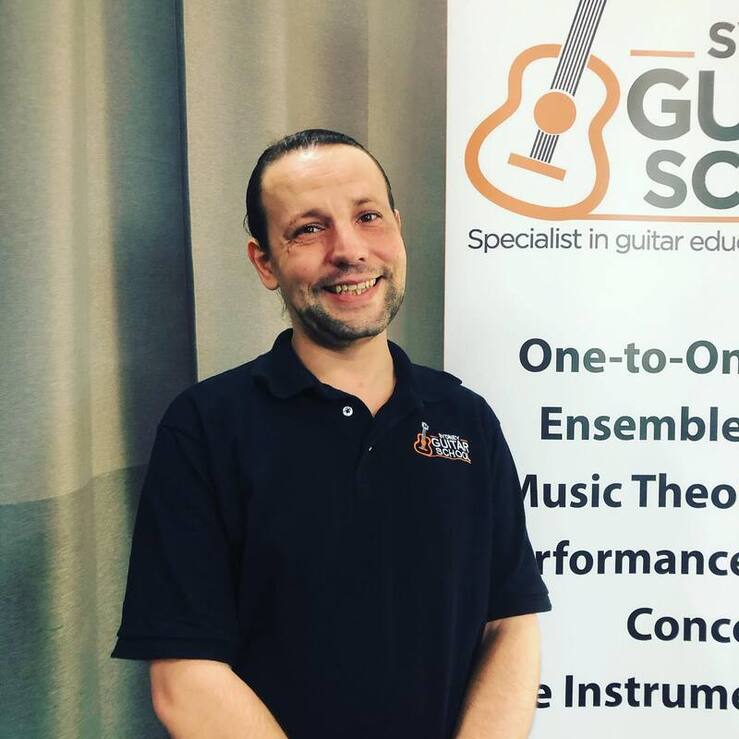 Tobias is versatile with what he teaches and plays and enjoys helping students who want to sing and play guitar and use the guitar as an accompaniment to the voice. Tobias is knowledgeable, patient and knows how to get the best out of each student he works with.

He is well known at SGS having been involved with the school over the last few years. Tobias is happy and experienced at teaching both face-to-face and online classes.

​Tobias currently performs with the Sydney Classical Guitar Society orchestra and ensemble, the UNSW Guitar Ensemble, as well as Balinese gamelan ensemble Suwitri Jaya. Tobias completed his Bachelor of Music at UNSW majoring in creative practice. His research focused on the guitar works of Cuban guitarist and composer Leo Brouwer. 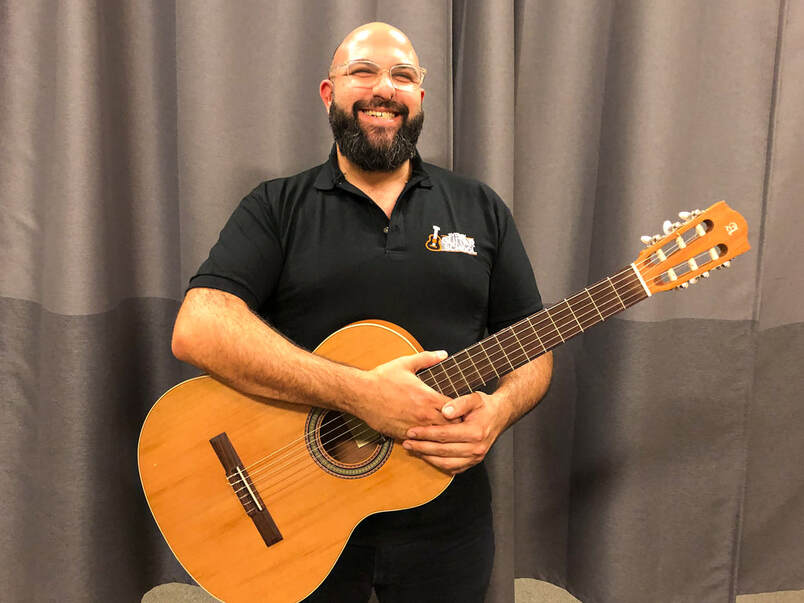 Raimondo Fioravanti. Guitar, Bass and Ukulele
Raimondo Fioravanti, has been teaching Guitar, Bass and Ukulele for over 15 years, he covers all contemporary styles including Jazz, Blues, Funk, Rock, R&B, Reggae, latin and Pop as well classical guitar. He holds a Bachelor of Music from the Australian Institute of Music majoring in contemporary performance.

With 18 years of professional performing experience on stage with some of Sydney’s most sought after cover bands, artists and touring companies as well as experience in the recording studio, he incorporates the knowledge and skills obtained over this time into his lessons. Raimondo accompanies any vocalists/instrumentalist that require HSC accompaniment and repertoire.

​His main focus on all his lessons, especially for the beginners, is the importance of technique and how it will influence the hands, fingers, body and mindset. All the while making them fun enjoyable interactive and informative. Raimondo is a successful participant of the Sydney Guitar School Teacher-Mentorship Program. 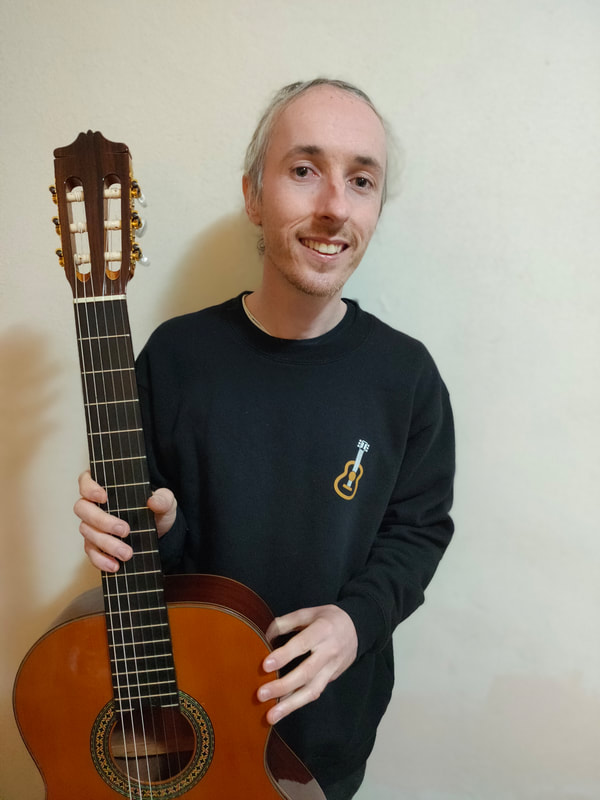 Peter Farrell has immersed himself in countless musical styles over many years, including classical, world music, pop, rock, jazz and musical theatre, and has spent over ten years performing, composing and recording in these styles. A member of renowned African artist, Afro Moses’ band from 2012-2020, original blues/rock act, Midnight Movers since 2015, as a soloist, and having played in many
cover duos and bands, Peter has toured internationally and interstate numerous times.

When performing as a soloist, Peter performs original instrumental guitar pieces consisting of unusual tunings, intricate arrangements of melodies, chords, bass lines and percussive beats simultaneously, with jazz-influenced chord voicings, all whilst employing techniques from many diverse styles of music including classical, contemporary fingerstyle and flamenco. He often uses digital effects and a loop pedal to
add unique atmosphere to his pieces.

Peter has toured internationally across three continents, having performed numerous shows in Ghana, West Africa as a soloist in 2016/17, in Indonesia with Afro Moses in 2016 and 2017 (including at Bali Reggae Star Festival, the biggest reggae music festival ever held in Bali), and interstate numerous times, most notably performing with Afro Moses at the National Folk Festival in Canberra in 2018 and 2019.
Peter has performed alongside many highly-renowned Australian and international musicians, including Tash Sultana, Ash Grunwald, Ngaiire, Tijuana Cartel, The Strides, legendary reggae artist Lucky Dube’s bass player; Tio Moloantoa, Wendy Matthews, Jenny Morris, The Beautiful Girls and 19-Twenty.

Peter ensures that he finds out what the students’ guitar goals are as well as their musical interests, and lessons are tailored accordingly to their needs; maintaining a balance between learning pieces of music and developing theory, technique, reading and improvisation. Peter created a positive environment lessons, where students are motivated and inspired to work consistently and in-depth at their craft, and encouraged to ask questions. Peter sees the importance and rewarding process of developing rapport with students and seeing them progress and become increasingly passionate about music and their instrument over time.

Peter holds a Bachelor of Music degree from University of Newcastle, where he majored in guitar performance, and a Masters degree in Teaching, majoring in secondary music. He is currently studying a Bachelor of Audio at SAE Institute, Sydney. Peter is a successful participant of the Sydney Guitar School Teacher-Mentorship Program. 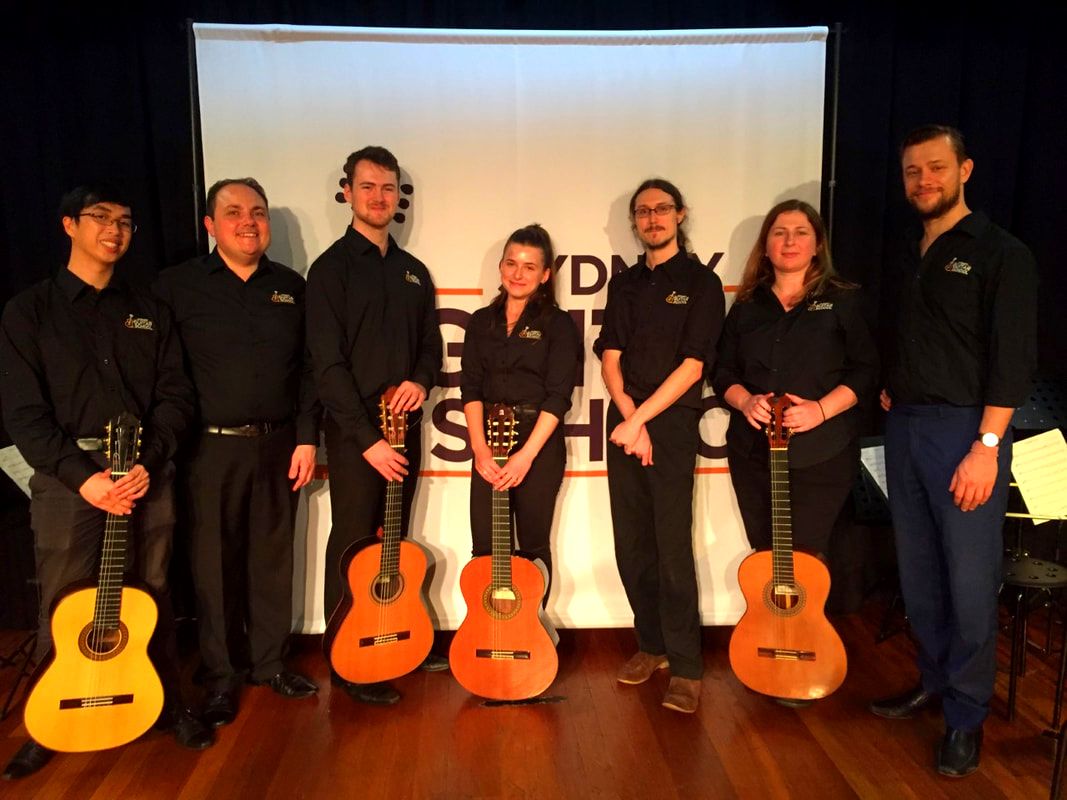